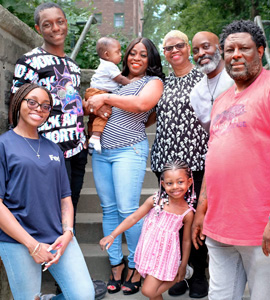 The Smith Roberts family – John, Chantel and their two children – had been living in the same building in Yonkers for 12 years. Their extended family, including Chantel’s mother, father, sister and aunt, all live in the same building. Their oldest son was learning on-line from home, John was working as a doorman in a Manhattan building and Chantel was a supervisor at a Jewish Behavioral Center. They even managed to put some money away. But all that changed dramatically in January 2021, when a massive fire broke out in their building.

“It makes me anxious to think about it, it was traumatizing” says Chantel. “I came home to the building in flames and my family inside.” Everyone made it out, but the building was seriously damaged and uninhabitable, forcing John and Chantel, their children, and her parents to live in a hotel for a month at a cost of $5,000, wiping out their savings.

Their building gave them a one-month rent credit, but when they returned to their apartment, everything they owned was covered in soot, damaged by water and reeking of smoke. “We had to clean or replace everything ourselves; it was a nightmare,” Chantel remembers. It took weeks to make their home livable. But then came more bad news: Chantel was laid off. John was still working but his salary alone was not enough to cover their monthly expenses, plus the addition of fire damage repairs. With their savings gone, debt was piling up. Chantel had always been reluctant to ask for help, but in May of 2021, she learned she was expecting a third child and knew that she had no choice.

Through a friend at church, Chantel connected with The Bridge Fund. Working together with the Department of Social Services, The Bridge Fund helped them clear up heir $10,000 debt. “When everybody denied me help, The Bridge Fund didn’t. They were nice, welcoming, and understanding.
I would describe it as our saving grace, for sure.”

The new baby is now seven months old and thriving. Their older son is entering his senior year of high school and planning for college. Their younger daughter starts school next year. The Smith Roberts family is in a new apartment in their building and looking toward to a bright future.