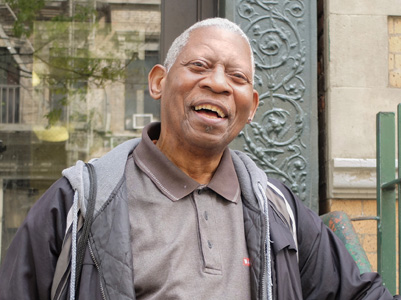 Brett Barnes lives in the rent-stabilized apartment in upper Manhattan where he raised his family. It’s been his home for 30 years and today he enjoys welcoming two of his grandchildren there on the weekends while their mother works. Brett says that he loves walking along the Harlem River to get exercise and fresh air. He can’t imagine living anywhere else.

Brett earned a bachelor’s degree in education and started teaching in the New York City school system in 1986. He is passionate about teaching, “You have to build them up” he says about his students, and he knows he has truly helped a lot of New York City youth in his time. Before the pandemic sent City students home for remote learning, Brett was still, even at 73, a regular substitute teacher in the school system, working in summer programs after the school year finished. The teaching income combined with his social security gave him enough to get by. But COVID changed all that– with schools suddenly closed, there was no need for substitute teaching, and no summer programs being scheduled.

The loss of steady work was a blow, and on top of that he contracted COVID the summer of 2021. By October, Brett had fallen four months behind in rent, owing almost $4,000. But once pandemic conditions improved, and a return to in-person schooling was announced, he could see a light at the end of the tunnel if he could just get caught up on his rent. The Bridge Fund made that happen. It helped him secure a $1,974 ERAP grant from New York State and provided Bridge Fund grants, totaling $1,976. Together, these two amounts covered Brett’s past-due rent. The Bridge Fund also provided him with a food card and a utility grant to tide him over until his paychecks started coming again.

Brett now has a long-term substitute teaching position with a regular salary and is still in his home. He credits The Bridge Fund for helping him out in a time of real need: “The Bridge Fund,” he says gratefully, “is an organization designed to support people and families. I found them to be extremely supportive and very clear and transparent. They were totally on point for what I needed.”