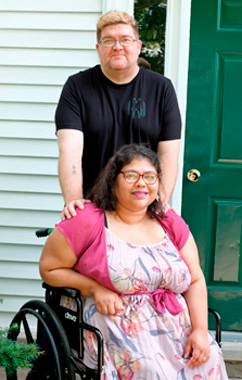 Edwin Chabot, a Bronx native, has worked as a stagehand and lighting designer for events and shows for over 10 years. He and his wife Eve live in Yonkers. Eve is disabled, recovering from a stroke, and uses a wheelchair. Their one-bedroom apartment in a quiet neighborhood looks out on a pond, a haven that Eve loves. And they are on the first floor, which is a big help with her wheelchair. Eve’s work history didn’t qualify her for disability, so Edwin’s income is all they have, and he works as many hours as he can get.

Edwin and Eve were doing fine, but when the pandemic struck, events and shows “were the first to be shut down and the last to come back,” says Edwin. Once his work dried up, it was only a matter of time before they fell behind on all their bills.

When Edwin had exhausted their savings and his unemployment benefits, he reached out to his State Senator’s office for help and they referred him to The Bridge Fund. “They were great,” he remembers. “I had applied at some other places, but The Bridge Fund was more personal and more on point.” Edwin and Eve ultimately received rental assistance from The Bridge Fund’s Yonkers Emergency Rental Assistance Program, for which Ed is incredibly grateful. He hates to imagine what might have happened: “Without question we would have lost the apartment and moving would have been very difficult. My wife was really worried about it. I’ve never had to apply for any assistance before … this was a Godsend!”

Today Edwin is working six days a week and the industry expects the next couple of years to be busier than ever before. Edwin and Eve are still in the apartment that she loves so much and are free of debt, so it’s another Bridge Fund happy ending!