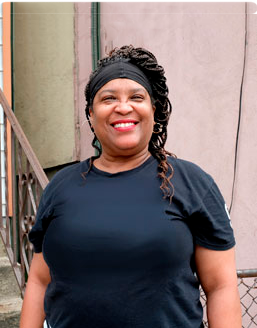 Donni Smith, a self-described Jamaican-Italian-American, loves her apartment in Yonkers, where she’s lived for almost 11 years. “My neighborhood has all races and all are just above the poverty line,” she says. “Everybody works, and works really hard.” Like her neighbors, Donni has also always worked hard— as a cashier, a caregiver and a cleaner¬—whatever jobs she could find. In the winter of 2019 it came as a shock when she was disabled by heart trouble. “I thought I was invincible,” she remembers. Full-time work was no longer possible for her.

Because of the disability, Donni began receiving Supplemental Security Income (SSI) and Supplemental Nutrition Assistance Program (SNAP) benefits, and those, along with working part time, kept her afloat in her home. But when the pandemic hit, she says, “just like that, everything shut down, and it was bad. There was so much suffering around here.” With no more part-time work available, Donni wasn’t exempt from that suffering. Soon back rent began piling up, with no relief in sight. “As a woman over 50, it is very scary to think of losing the place where you live. This apartment is my home, it was awful.”

But Donni describes her landlord of 11 years as “one of the good ones, he was being as nice as he could,” and he tried to work with her. It was her landlord who suggested The Bridge Fund and, in the end, with a contribution from Donni of $1,000 and The Bridge Fund assisting with $1,910, her balance was cleared. Now Donni could concentrate on her health, rather than trying to hold on to her home.

Donni is now recovering from heart surgery in her apartment and won’t soon forget her experience with The Bridge Fund. “God bless you guys,” she says, “I am so grateful. I never believed in miracles before. When you live barely above the poverty line, it’s hard to believe that somebody will help you, but that’s who The Bridge Fund is—you help. I am so thankful!”