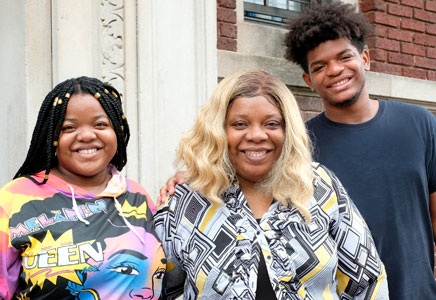 The Griffin household in Mount Vernon is large and multi-generational. Robert Griffin is a security guard, his wife Janet, a homemaker, nineteen-year-old twins Jerry and Raquel are finishing high school and there are six- and nine-year-old grandsons that Janet and Robert have taken in to raise. When the younger children arrived, it put a strain on an already tight budget. When COVID came, Robert stopped getting regular work. Then he was injured in a car accident, and the $500 bill for an ambulance was another financial blow.

All of this came on top of landlord problems. The family’s apartment was in bad repair and without gas or heat for six months. “It was awful, so, so cold, and we only had those small electric heaters,” Janet remembers. The Griffins qualified for Section 8 housing assistance, but due to shoddy repairs by the landlord, the apartment couldn’t pass inspections, and the housing benefit wasn’t paid. Past-due rent piled up, leading to exorbitant late fines from the landlord and soon their debt was spiraling out of control. It became clear to the Griffins that they were in an impossible situation, so they turned to a Legal Aid attorney to help untangle the mess.

With Legal Aid’s help, the benefit payments were sorted out, but the Griffins were still behind $3,870. Their government benefit of $1,145, and their own contribution of $1,225 were not enough, but with The Bridge Fund assistance of $1,500 they were out of debt. Now Robert was working again, and the Griffins were determined to get into a better housing situation. Despite a very tight rental market in New York, after weeks of searching, Janet felt lucky to find something they could move into in January 2021. But the plan started to fall apart when last-minute costs were more than they could afford. “I was afraid that I would have to start the search again,” Janet remembers.

Once again, The Bridge Fund lent a hand, providing $1,200 in the nick of time to pay the first month’s rent and make the move possible. Now, with her family in the new apartment, Janet can start to focus on the future again. “The Bridge Fund helped us when we needed it the most, and we can make repayments slowly. We are so grateful; without The Bridge Fund we would still be in our old apartment.”