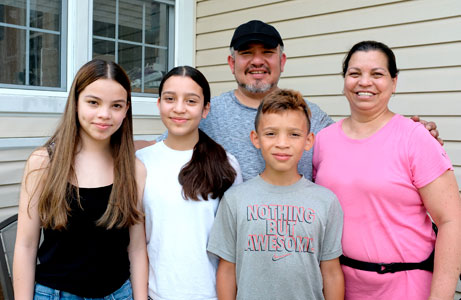 Soledad and Pedro Ramirez have three children: Candy, 14, Stephanie, 13 and Alfredo, 11. The family of five has lived in the same house in New Rochelle for 13 years, and it is the only home their children have ever known. It’s a good place for them, says Soledad, in a safe neighborhood with reasonable rent.

When the pandemic hit, Pedro’s landscaping jobs were diminished. Soledad was working a few days a week as a housekeeper, but her hours were much reduced, then the work stopped altogether. Soon all three children were attending school from home, which meant that the family, already close knit, became even closer now that they spent all day together exclusively in the residence. It also meant eating every meal at home, which tripled the family food budget. Added utility costs further increased their expenses.

The Ramirez’s monthly rent is $1,200, and with their income reduced and expenses increased, it did not take long for the family to get behind by $3,000, a huge sum for them. Soledad was worried about losing their home and couldn’t hide her concerns from the older children. “We knew it was bad,” says Candy, “and we were worried about having no place to live.”

The local Community Center referred the family to The Bridge Fund of Westchester. The case was quickly evaluated, and The Bridge Fund provided a $900 loan and $900 grant, and the Ramirezes contributed $1,200, clearing their debt. Pedro has returned to landscape work, and Soledad is trying to find more housekeeping jobs.

Middle schooler Stephanie says that being home was challenging. The three children missed being with their friends and the in-person learning. They are all excited to be returning to school in the fall. But most of all, they are happy that they were able to stay in their home, thanks to The Bridge Fund.