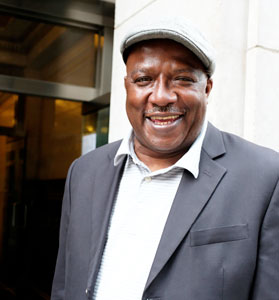 Bill Reece and his wife Betty were together for over 25 years, sharing the same affordable apartment in Queens. Bill cared for people with disabilities while Betty held various service jobs. They had been through a lot—her kidney transplant was just one of their challenges—but they were getting by and had a happy life together. Then in 2019, five years after the transplant, they suffered a new setback: Betty was diagnosed with congestive heart failure. No longer able to work, she faced rounds of doctors’ appointments, more medications to pay for and, on occasion, visits to the emergency room. Through all of this, Bill was working as much as he could while caring for Betty, but they were falling behind on rent, which meant housing court appearances. Bill says he felt “like a hamster going around in circles trying to figure out how to pay next month’s rent.”

Then the pandemic hit, and in April 2020 Betty again developed severe breathing issues. Bill was forced to call an ambulance, but this time, due to COVID regulations, he couldn’t go with her to the hospital. He remembers, “I stood there on the street, and there she went.” It was the last time he would see her alive. “I never got a chance to say goodbye to her, none of that.”
Betty was taken to Elmhurst Hospital in Queens, a borough being ravaged by the virus. Elmhurst was overwhelmed—too many critically ill patients, staff shortages, bodies being stored in freezer trucks—all with no relief in sight. The next day, Bill called the hospital to check on Betty. “They said she was waiting for a bed,” he recalled, “I thought that sounded like things were ok.” But the next day he found out the truth. “They said she died of a heart attack. I don’t think she was treated. She didn’t stand a chance …” With Betty gone from his life, his world was destroyed.

That was the beginning of an even worse nightmare for Bill as he tried to claim his wife’s body. ”I called the hospital and they said she was on Randall’s Island. I got frantic, I thought she was in a mass grave!” It took days of distraught calls to locate her body, and then a month to find a mortuary that could handle her burial. She was finally laid to rest almost three months after her death. Meanwhile, Bill had been furloughed from his job, falling into a deep depression as he struggled to deal with his loss and mounting debt. Unable to get back to work until October 2020, he learned by December that his rental arrears totalled $13,942, a staggering sum for him to try and repay.

Bill needed help and The Bridge Fund stepped up to the task. Drew Geer worked tirelessly to leverage funds and was able to get him a $7,905 One Shot Deal from the Human Resources Administration, plus a $2,707 grant from the Community Service Society. Along with a Bridge Fund grant of $2,330 and some of Bill’s own funds, it was enough to clear the back rent. “I would have been lost without that connection to The Bridge Fund, in big trouble,” Bill says. “They took that burden off my back, it’s a great thing.”

Today Bill says he thinks of his Betty all the time. “You don’t want to accept it, but you will, and you learn to live with it. I’m trying to put my life together, one day at a time.”