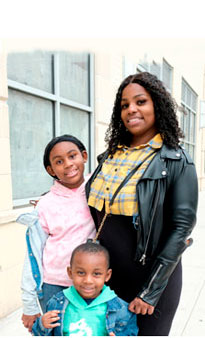 Roslyn Franklin works for the New York City Housing Authority as a heating plant technician, and she and her two children live in a rent-stabilized apartment in The Bronx. In early 2020, her two-year old son was receiving free daycare and his eight-year-old sister was attending school. The family was getting by, but when the pandemic struck everything changed. Schools were closed abruptly, leaving Roslyn—like so many working women all over the country—scrambling to figure out childcare.

After a few months the added costs of childcare put Roslyn behind on rent and utilities. As a result, she was forced to take a paid family leave to be with her children. But while on leave she was paid only a portion of her normal salary, making it impossible for her to get caught up.
“I was really stressed about being behind on rent, and afraid we were going to get put out,” she said. “I was trying to make sure the kids knew mama would take care of everything,
they shouldn’t have to worry about things like that.” But losing the family’s home became a constant worry.

Behind $1,700 in rent and $700 in utilities, Roslyn applied to the New York City Human Resources Administration for relief, but was only granted partial help. That’s when she was referred to The Bridge Fund, which covered her rental arrears and the remainder of her Con Ed bill. “They got me out of debt,” she says, “and it was a big help!”

Roslyn is back at work now, having found a childcare solution to tide her over until school starts again. She is reconnecting with The Bridge Fund’s budget counseling program, which Roslyn feels will help her in the future. “It’s great, I’m looking forward to that training.”