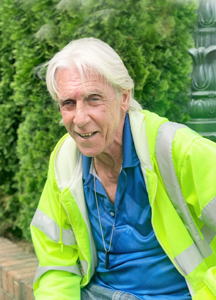 “Public parking garages often served as the ultimate place to sleep, to shelter from poor weather, were perfect for hiding from overly critical community members, and allowed for a somewhat peaceful rest, until daybreak. My stay in the garage would be harshly disrupted by police who would remind me of the no loitering signs strategically placed in any crevice that I might slip into for a nap or a night of safety. This led me a few blocks away to a large green awning over an abandoned store front. Because the sidewalk, unlike the parking garage, leaves you completely open and vulnerable, I got very little rest and sleep. After time, I would move to a new location to limit any attention by police, raging citizens, or other territorial homeless people. It was demoralizing, frustrating, and even scary, but I got used to it.”

Meet Frank, a 69-year old retired cross-country truck driver from a small town in Northern Westchester County. In May 2020, Frank’s nearly five-year bout with street homelessness ended when he moved into his very own studio apartment in White Plains, New York.

Frank grew up with three brothers, a stay-at-home mother, and father who worked in New York City. Although they had the “picture perfect” family from the outside, Frank described a childhood of trauma, as his father’s punching bag for stress relief. He left home at 17 and faced his first experience with homelessness.

At 18, he earned his commercial driver’s license and began driving trucks cross country, which he did most of his life. Attempts to settle down in New York, Connecticut and the Midwest didn’t work out. Frank always returned to driving, where his truck cab and inexpensive motels served as his home. His transient lifestyle cost him his marriage and relationships with his children.

Eventually, Frank was injured and unable to drive any longer. He attempted to do more sedentary jobs, but doctors encouraged an early retirement. So, with immense health issues—many he still battles today—he retired at age 62.

A search for a home began. Frank first moved in with his mother in her senior housing, but because of restrictions he was unable to stay very long. He then began renting a room, but after several months of rental arrears, he was evicted. Frank’s Social Security had been delayed, and his savings were depleted. He made several attempts to live in county shelters but felt they were not a good fit. Consequently, he found little option but to return to the street.

At the beginning of every month, with his Social Security income of $800, Frank would find an inexpensive motel, “just above a shelter,” where he could shower and get one good night’s rest. If his funds permitted, he would do this twice a month.

Some may wonder how The Bridge Fund of Westchester encountered someone in Frank’s situation, and what role it could play in helping him succeed. Our team learned about Frank while doing outreach in the Peekskill area. Talking with local leaders about our services, a colleague mentioned Frank’s circumstances and asked if we would help him. Upon meeting him, our team immediately felt committed to helping Frank achieve his goals of stability, safety, and ultimately, a place to call home.

We got to work determining what services Frank was eligible for and partnered with other providers to complete his entitlement applications. After some guidance from the local Continuum of Care Partnership, Frank’s food stamps were reactivated and his Medicaid and Medicare status updated. The documentation of his street homelessness presented the opportunity for permanent housing, with rent based on his Social Security income. The Bridge Fund staff followed through to ensure that this application was progressing and encouraged Frank to transition to a shelter during this time. Frank acknowledged his emotions of frustration, fear, and uncertainty, but was willing to trust our staff, who convinced him that a shelter was essential for his safety and well-being.

Entering a shelter proved crucial, given the COVID-19 pandemic. Frank’s age and health conditions made him extremely susceptible, which homelessness would only exacerbate. Frank did contract a mild case of COVID-19, but because of the stability of the shelter placement and constant staff supervision, along with The Bridge Fund team’s ongoing presence and willingness to ease Frank’s worry, he was able to manage. Fortunately, it did not have an impact on his other health conditions.

Finally, after an unwanted shelter stay, a roller coaster ride of emotions, a series of medical issues and hospitalizations, and testing positive for COVID-19, Frank was confirmed for an apartment! The Bridge Fund staff helped Frank complete the necessary paperwork, worked with him to locate furniture, and accompanied him to see the apartment. They also helped enroll him in treatment programs closer to his new residence, and transfer all his medical records to his new hometown.

Frank continues to be in contact with The Bridge Fund staff and occasionally meets with them. When asked about his passions before life took a turn, he talked of his love for drawing and painting, and thanked the team for sparking this fire again. He plans to show them some sketches soon.

Frank has not been the typical Bridge Fund client. However, the Westchester team is grateful for this triumph—a triumph for Frank, and for The Bridge Fund family—a family that will always welcome Frank with open arms.